Why did WW1 begin? 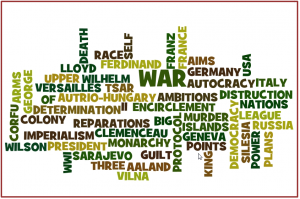 We are now about to plunge into one of the main topics of this year:

No historical event is the result of only ONE  cause, that is why we shall be considering the main causes.

In this post we will collect different types of material related to the causes of WW1.

We shall start by watching a Kahn Academy video on the Empires before WW1.


Watch the video and analyse the following points:

1. What is the connection between land boundaries and linguistic boundaries in Europe now?

2. Write down 3 geographic differences between the map TODAY and at the beginning of the 20th Century?

3. Was Serbia part of the Austro Hungarian Empire?

4. Write the name of at least 4 ethnic groups inside the Austro -Hungarian Empire.

Let´s now go on with the situation of Germany and Italy.

Watch the video and answer the following questions:

We are now familiar with the Empires at the beginning of the XXth Century and with their strengths and weaknesses.

We will now take a look at the system of alliances. The following video will throw some light on the alliance system.